After summer come… the swallows! 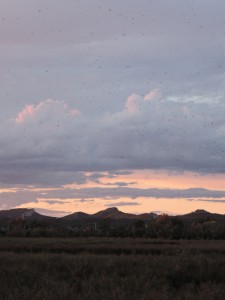 From the end of August the swallows start to make their return to the Marais des Baux.
This exceptional sight leaves us awestruck every year:
With the setting sun at nightfall dozens of swallows arrive over the marsh to eat the flies, mosquitoes and dragonflies. Others join them – and there are a hundred. Then another hundred, and soon, there are thousands!
On some nights there are too many to count as they fill the sky with their swift wingbeats and their acrobatics. Five thousand? A hundred thousand? Half a million?? Who knows?! With this swarm of birds it’s impossible to make a reliable estimate.

How small and agile they are: a Sparrowhawk darts from the poplar woods to try and seize one on the wing, but invariably misses its target, which had already anticipated the attack. Hobbies are more patient and persistent, by ganging up together in groups of two or three to panic the swallows they usually manage to catch one for supper.
And now all the swallows, following the call of the night, plunge into the reedbeds, a real shower of birds. They grip and cling to the stems of the reeds. Suspended above the water, they are protected from terrestrial predators, who will have to make a lot of noise in order to get at them. But also at night, there is a danger from the sky: the Eagle Owl has been calling. Now he is silent and all the marsh-creatures are uneasy: he is in flight, in search of his first meal of the night. 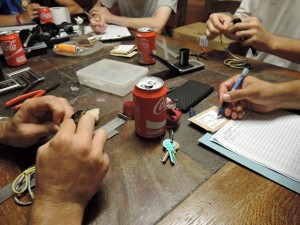 It is in this incredible environment that the A Rocha team, helped by volunteers from all over the region, carry out the survey of swallow migration through the technique of ringing.
Nets are erected in the middle of the reed-beds, and the swallows are attracted to the area with a recording of their cries. Once captured, they are delicately released from the mesh and placed into large cardboard boxes, in which they will pass the night. Next, the boxes are transported to Tourades, for the swallows to be ringed and measured. This is how we learn about their state of health, and other useful information such as the ratio of young and adults, which lets us estimate the rate of annual reproduction.
From time to time we catch a swallow that has already been ringed elsewhere: in France perhaps, or just as likely in Switzerland, Germany, Spain, Italy, or even Norway! 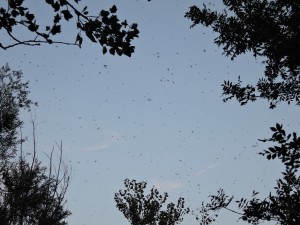 Elsewhere in the world, other ringers will have the chance to catch one of our swallows. This is how we gain a better understanding of the route these birds (the smallest less than 30 gm), take in their passage to the south of the Sahara for the winter.
Early the next morning it’s usually Patrick Bosquin, the first up, who sets the captive birds free. They gather together and the little group continues its road to the south, bearing these little rings, symbols of hope for the return to the Marais des Baux next year!

We wish them Bon Voyage!

(Thank to Alison Walley for the traduction)