Fast for the climate

As we already mentioned in the article “Climate issue: A Rocha involved in the COP21”, 2015 is an important year for the future of our planet.

In addition to the big political decision, it is an opportunity for each of us to act in everyday life and contribute to the improvement of our ways of living. For that, it must pass through awareness.

We hear too often (and understandably), arguments like “my level that I do not change” or “to the point where it is …”. Moreover one does not feel concerned because it is the poorest countries that suffer the consequences every day.

So, before you get discouraged by setting the bar too high, it is important to realize personally and integrate mentally and physically we can act effectively on our scale. This course begins with small acts “green” like turning off the light, sorting waste, avoiding plastic bags … but also, in the tumult of our daily lives to take time to stop and think.

“As climate change rises sharply in the political agenda, thousands of people around the world have decided to fast once a month to support those already affected. We want to tell world leaders that they must do more to resolve this crisis. This should include the new commitments made at the Summit of Heads of State to be held in September at the invitation of Ban Ki-Moon, as well as intensified action to achieve a treaty that is fair, ambitious and legally binding at the Climate Conference Paris 2015. ”

The situation is urgent, fast with us!

Here to help you a list of MEETTING across France the 1st of each month from 1 September. 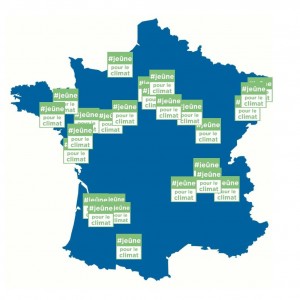