A new protocol for orchids at Courmettes

In 2010, of the 160 species of orchids identified in mainland France, 27 were threatened with extinction, and 36 were in the process of becoming so.* On the Domaine des Courmettes, a Natura 2000 site managed by A Rocha, 34 species have been identified, 11 of which are classified as protected species in the PACA region. At the beginning of 2022, our team decided to set up a test protocol for monitoring the orchids to protect them from potential threats and to monitor the ecological status of the site.

Orchids: flowers that are sensitive to changes in their ecosystem 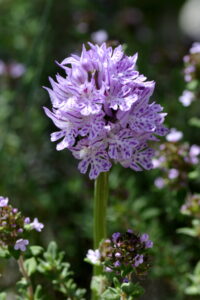 There are between 19,000 and 24,000 species of orchids in the world, whose interactions with their environment vary greatly depending on the species. Their annual growth cycle is highly dependent on the temperature of their ecosystem. For example, tuberous orchids only flower after a state of ‘dormancy’, which occurs when temperatures drop during the winter. Similarly, in places with very hot summers, when water resources are very limited, the plant adapts and enters a ‘resting’ phase. The growth of most orchids also depends on their exposure to light, as flowering is directly linked to the photoperiod (day length). Thus, in the south of France, where the greatest diversity of orchids is found, the flowering phase is earlier and longer than in the north of the country. 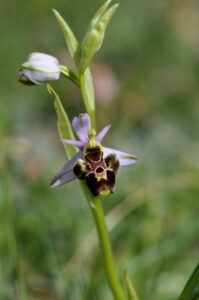 Orchids are bio-indicator species: their presence and evolution reflect variations in environmental conditions, such as the disappearance of environments, overgrazing or climate change. The study of bio-indicator species therefore makes it possible to monitor the evolution of an ecosystem and its ecological state. In our case, the Domaine des Courmettes offers a mosaic of environments: wetlands, forests, grazed and/or mowed meadows, etc. This variety of environments and also of human activity (more, or less, intensive grazing, mowing or not) allows orchid species with different ecological needs to establish themselves. Monitoring these different species with different ecological requirements makes it possible to follow the evolution of the different environments.

Why are orchids disappearing in France?

For several decades now, scientists have observed** a significant decrease in the number of orchids in France. The causes of their gradual disappearance include 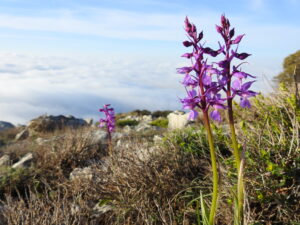 Since 2018, 34 orchid species have been recorded on the 600 ha of the Courmettes estate, 11 of which are classified as protected species in the PACA region. At the beginning of 2022, Coline Raillon, in charge of the nature side at Les Courmettes, and Alejandra, a European volunteer, set up a test study protocol on 12 areas with different types of habitats to :

This first year will allow the protocol to be tested and modified if necessary and the data collected in 2022 will serve as a baseline. We intend to continue this monitoring over the long term in order to gain a better understanding of the evolution of the ecological state of the estate and to be able, if necessary, to implement actions to preserve the various environments.