“Rise, take up your mat and walk for the climate”?

The story of the healing of the paralyzed man in the Gospels is surely not primarily intended to call us to march for the climate. But what can we understand from the biblical stories as a whole about the citizens’ climate mobilisations that will take place all over France on Saturday 12 March 2022?

Many warnings since the 1970s

Since the 1970s, many experts have been warning about the gap between the desire for unlimited economic growth and the rhythms and seasons of our planet. We are consuming more than the planet gives us and drawing on its reserves without ensuring a sustainable future in return. We are polluting and impacting our common living space, sometimes permanently. The consequences are visible: extinction of biodiversity, pollution, rising temperatures, famines, climatic events, pandemics, armed conflicts…

Despite these warnings and the actions taken, our impact on the planet and living things has continued to worsen. Today, the scientific community is still calling for measures to be taken to deal with the climate emergency and to limit the damage we are inflicting on all living things.

How can marching make a difference?

A climate march is a public demonstration that aims to put the climate emergency at the heart of the public and media debate. It is part of the fundamental rights of European and French citizens and is regulated by law. 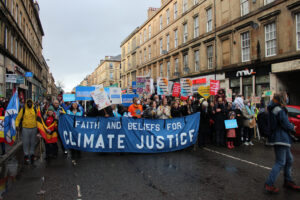 As citizens living in France, we are called to change our lifestyles individually and collectively. Through this peaceful demonstration, we can inform people around us about the climate emergency and ask the authorities to help us collectively move towards a more just and sustainable society, especially in light of the forthcoming French elections.

As a Christian, I can name at least three reasons to go on a march:

A Rocha mobilises supporters for the march of 12 March 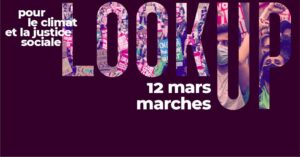 The march poster “Look Up”

As last year, in March or May, A Rocha is encouraging friends and supporters to join us in the various “Look up!” marches that will take place in 130 towns and cities across France this Saturday 12 March 2022. The impact of a march is directly proportional to the number of demonstrators demanding the same cause, so come in numbers!

You can find all the practical information here (in French)

A Rocha has signed an article with other French Christian associations calling on the candidates in the presidential elections to take greater account of ecological issues, to be published on Thursday 10 March 2022 in the newspaper La Croix.