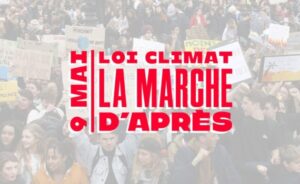 A Rocha France is once again joining forces with numerous organisations (including Oxfam, Greenpeace, France Nature Environnement etc.) to call for a new climate march.

The Climate Law, the last environmental text of Emmanuel Macron’s five-year term, is indeed a climatic and social failure. The government and the majority have weakened the bill and prevented the measures of the Citizens’ Climate Convention from being taken up by MPs.

On Sunday 9 May, just after the vote on the bill in the National Assembly, we will march to denounce the government’s lack of ambition in refusing to face up to the ecological emergency, and to unite us in the face of the challenges ahead.

Numerous marches are being organised throughout France. Find the one near you: https://marcheclimat.fr/9mai/

PS: invite your friends, family and colleagues to this event!

Our centresBecome a memberVolunteerDonate
Programme at Courmettes for 2021 – an update 6 May 2021
Support the project: “Together to protect the Southern Festoon” 6 May 2021
Latest news
The Climate Law: 9 May – The March! 5 May 2021
A Rocha arts: join our online choral project! 5 May 2021