Each year, autumn marks a transition in the rhythm of Courmettes. This last year, the transition was all the more radical because of the health context! Since the end of the summer, our role as host was called into question. Even though we were able to host the last weddings of the season with a reduced number of people and a strict sanitary protocol, we had very few groups. However, we still have good memories of the Discovery Class in mid-September and of the training course on “the world of the night” organised by the Parc du Mercantour and the Regional Natural Park of the Préalpes d’Azur at the beginning of October. We would also like to thank Richard from New Zealand, our only volunteer in recent months. 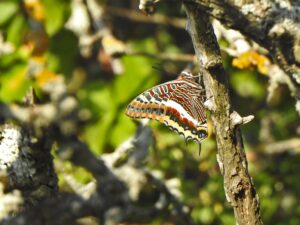 These quieter times are frustrating in many ways, that’s for sure. But they give us the opportunity to look up and outwards, to see with joy the rich times we lived during the summer, but also what has progressed at the Courmettes during the past year. Of course, we would all like it to go faster, but like nature, we have to learn patience. A team week at the end of October allowed us to take a break together, to marvel at the work of the Creator, to share what weighs on us in our work, to realign our vision of living together, and to reflect on the rhythm of rest and welcome at Courmettes. It was a privilege to have the time to experience this together!

Since the beginning of the lockdown, Courmettes has been running even more slowly, with closure of the centre and part-time working for several of us. Nevertheless, we continue to make progress on the building works, and several projects are underway to improve our reception conditions even further. We will tell you more at the end of the winter. We are preparing for the 2021 summer season, hoping to be able to welcome various groups in better conditions. Reservations for weddings are also almost complete. Finally, our conservation work is continuing, with the monitoring of the ponds in particular.

It is obvious that, as for many organisations, A Rocha France’s finances were put under strain in 2020. We invite you to consider supporting us with a donation towards our mission to preserve, restore and enhance Courmettes’ natural and architectural heritage. We also hope that we will be able to welcome many volunteers in 2021. 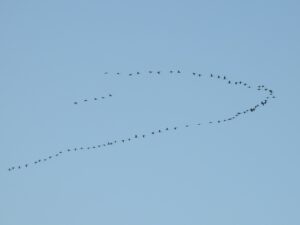 Autumn 2020 will remain in our memory at Courmettes as a season when our activity was aligned with that of nature. In September, we could still admire a large number of insects, such as this Two-tailed Pasha passing through, but also their predators – reptiles, or migratory stopover birds such as Spotted and Pied Flycatchers. A team outing with CEN-PACA (Conservatoire d’espaces naturels de Provence-Alpes-Côte d’Azur), focusing on geology, also allowed us to observe the Autumn lady’s tresses (Spiranthes spiralis), a late orchid. October marked the arrival of the wintering birds, while insects and reptiles became more and more invisible. There was no doubt when December arrived, as we were reminded of the shorter days and cold evenings with very clear starry skies, as well as the passage of common (Eurasian) cranes. They will come back at the end of winter and announce the beginning of spring!