Would voting have a greater impact on CO2 reductions than stopping driving?

This is probably one of the most asked questions of the moment: what can an individual do, on his or her own, in the face of the magnitude of the global warming problem? What action has the greatest impact on reducing CO2 emissions? Become vegan? Stop flying? Recycle? Buy carbon offsets? And what about our participation in the democratic life of our country? Three researchers published a study in 2021 that assesses the contribution of a Canadian citizen in reducing CO2 emissions when he or she decides to vote for a candidate who supports strong climate action.

Seth Wynes, lead author of the paper, explains the purpose of the study: “If I want to know how many emissions I save by switching from a petrol car to an electric car, I can find out; the same goes for buying more efficient fridges or switching to a vegan diet. But what happens if I vote for a particular candidate? We have no idea. It’s disappointing that no one has ever tried to measure it.”

Given that there is currently no way to measure the impact of a vote on reducing CO2 emissions, the authors set themselves the challenge of estimating the contribution of voters in the 2019 Canadian election, a campaign in which the parties were clearly divided on the climate issue. The Conservative Party wanted to repeal the carbon tax and enact policies contrary to the advice of climate experts. The Liberal Party (the winner), and three other parties, wanted to implement policies that would reduce CO2 emissions.

An analysis of the platforms of the two leading parties concluded that by 2030, Canada would emit 100 million tonnes (Mt) less CO2 per year under a Liberal-led government, or 14% of the country’s emissions in 2021. This would amount to a cumulative 612 Mt by 2030 and a total of 192 Mt for this election, based on projected emissions reductions that would be achieved over 3.4 years (the average length of a mandate in Canada).

To take this a step further, they also distributed the emissions reductions expected as a result of the election only among the winning electoral districts, i.e. the places where the Liberal Party or another climate-friendly party was elected. Programs in each winning electoral district were distributed only to those who voted for the winning candidate. In this approach, the median winning voter is responsible for a reduction of 34.2 tonnes of CO2, while the voters in the most influential electoral district are responsible for a reduction of 228.7 tonnes of CO2. 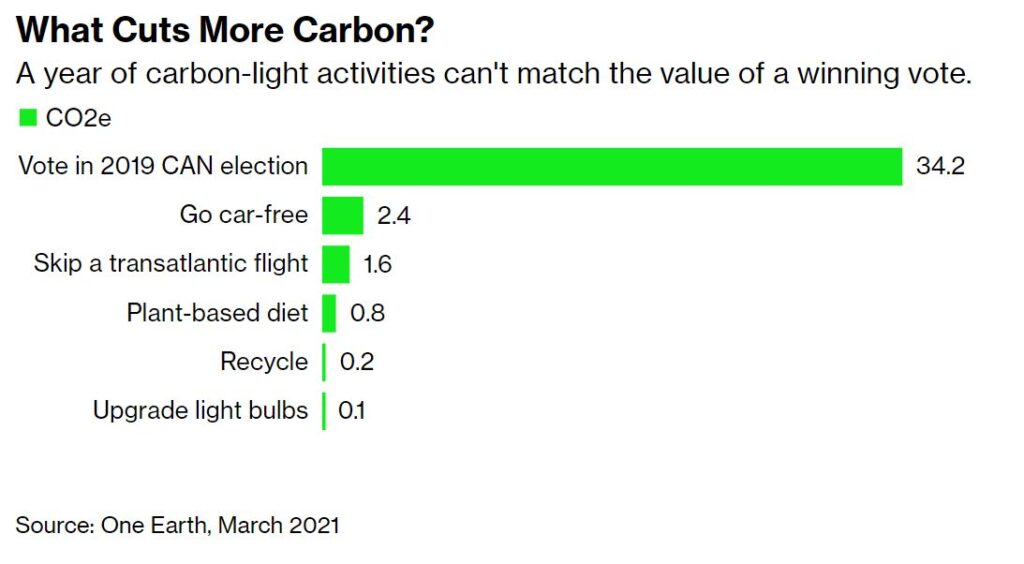 In a second, more probabilistic approach, the researchers studied the rationality of a citizen’s choice to donate to a ‘pro-climate’ electoral campaign rather than to buy carbon offsets. They conclude that supporting a campaign can be more effective in terms of CO2 reduction than private investments.

Commenting on the study, the researchers say: “The case studies serve as illustrative examples and should not be taken as precise estimates of the climate impact of voting. The cost of obtaining a vote in a campaign will always vary depending on the specifics of the campaign in question. In the future, we may have a better understanding of how this value changes in different circumstances. Nevertheless, the case studies suggest that individuals’ responsibility for emissions in elections may be comparable to the contribution they may incur for emissions in their daily lives.”

If the study had been conducted in France, the results would probably be different. Nevertheless, voting and helping to elect politicians who take the ecological crisis seriously and try to do something about it is a more important “eco-gesture” than one might think. Of course, there are not necessarily candidates for election who take the ecological crisis seriously AND at the same time defend the values that many Christians identify with. We urge you not to neglect the power of your vote, to educate yourself and pray about which candidate to vote for…and why not consider running in a future election 🙂