A Rocha studies the impact of burning on marsh breeding birds

Located in the Camargue, south of the Vallée des Baux, the marshes of Port-Saint-Louis-du-Rhône cover more than 500 hectares and are partly made up of marshes known as “marisque” marshes, as they are covered by Cladium mariscus, a species of reed that is rare in the Mediterranean coastal zone. The management of these marshes is carried out through a traditional agricultural practice called “écobuage”, which consists of burning the reeds in order to reopen the environment and encourage its consumption by livestock. However, the effects of this practice on the breeding birds of the marshes are not well known. The Camargue Regional Nature Park commissioned A Rocha to study the effects of this practice on breeding birds.

Focus on fire-clearing: fire as a pastoral management tool

Fire-clearing is a method of managing open environments that is widely used throughout the world, particularly to open up an area or increase the pastoral resource available to livestock. This method is used in many types of habitats, from the grassy savannah of East Africa to the Pyrenean mountain scrub, the Mediterranean garrigue and wetlands.

Fire has a strong impact on the fauna and flora of the fire-cleared natural habitats, especially on bird communities. However, this effect varies according to the type of habitat affected. Many studies show increased abundance and diversity of bird species immediately after the fire, followed by a rapid recovery to pre-fire levels. Conversely, other studies show a sharp decrease in bird diversity and abundance, followed by a more or less rapid return to pre-fire levels.

Our study site: the marshes of Port-Saint-Louis-du-Rhône

The marshes of Port-Saint-Louis-du-Rhône cover large areas within the marshes of the Vallée des Baux and the marshes of Arles, where they benefit from the fresh water resurgence of the Crau water table. The marshes of Port-Saint-Louis-du-Rhône are known for their large population of bitterns and rare paludicolous passerines. Locally, the site is subject to vegetation management by burning, which has been organised for several years by means of a fire rotation plan.  Today, there is very little data on the effects of fire clearing on marshes with mariscus, and none that we know of on the effect of this management method on the bird communities nesting in this habitat.

The objective of the study was therefore to assess the impact of fire clearing on breeding birds in the marshes of Port-Saint-Louis-du-Rhône, and more specifically on:

The objective of the study was therefore to evaluate the impact of fire clearing on the breeding birds of the marshes of Port-Saint-Louis-du-Rhône, and more particularly on 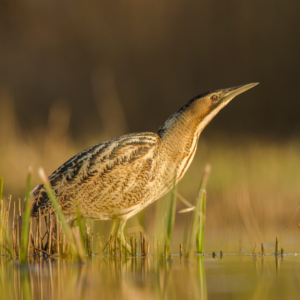 Fire clearing has a strong impact on marsh birds

Our study shows that firebreaks have a strong impact on passerines. Species assemblages differed significantly between recently burnt and older plots, and passerine abundance and diversity tended to increase with the age of the burning. However, the species present in the study area react differently: the Reed bunting is favoured by the clearing. On the contrary, the Moustached warbler and the Savi’s warbler only nest on plots that have been cleared for more than three years.

A rotational plan for the removal of debris allowing the plots to rest for at least four years would be favourable to the maintenance of all the species of marsh-dwelling passerines on the site. The size of the numbers of the marsh-dwelling passerines recorded and the population of the bittern make the conservation and good management of the site a major challenge for the conservation of these species in the south of France.

In the future, the programming of regular annual or multi-annual censuses would make it possible to know the evolution of the numbers of these populations and to adapt management measures in favour of one or other species.

Our survey also identified the population of the local subspecies of Reed bunting, which has a distinctive large bill. Called “witherbyi”, this subspecies is only found in the South of France and Spain where it is on the verge of extinction. With more than 100 breeding pairs, the marshes of Port-Saint-Louis are probably home to the world’s largest population of this threatened subspecies, which constitutes a considerable conservation challenge for the site.

We hope that future studies will enable us to extend the surveys to the adjacent marshes and to set up a specific conservation plan for this subspecies.