Not so blue on the Côte d’Azur… 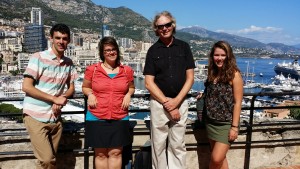 At the beginning of September, while the A Rocha France team meetings were going well at Courmettes after the summer break a team of marine biologists landed at Nice Airport; their mission to dive below the blue waters of our Côte d’Azur, and collect scientific data about it.
The team was made up of Bob Sluka, a specialist marine biologist who has been involved with A Rocha for many years, who was supervising the project along with Chris Walley; and team-members Benjo, Doro and Aline. They spent a short but intense five days in the region from Nice to Monaco, with many snorkelling sessions. As part of their trip they were able to visit the Oceanographic Institute in Monaco, to learn more about the region and meet local workers. 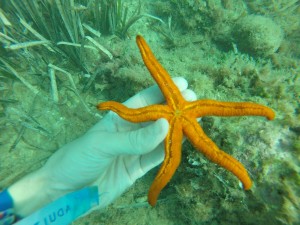 The waters of the Côte d’Azur may be blue but – contrary to their reputation among tourists the world over – they are far from being pure and healthy. For example, thanks to the growth of tourist complexes there is a great deal of pollution, and the industrial scale fishing has reduced the marine life. These and other findings worried our researchers. At Cannes, for instance, Homo sapiens seems to driven out all other kinds of species and with the result that biodiversity is dramatically reduced. If you are expecting to see dolphins, seals and a wide variety of marine life you are likely to be badly disappointed along the shores of Mediterranean.
Fortunately there are still marine reserves such as that at the island of Port Cros, further west along the coast not far offshore from Toulon. There the team were able to admire both the quality and the quantity of a marine life that they estimated to be three times as rich as on the mainland coast. They then took the road to Tourades, the other centre of A Rocha France, near Arles, from where they were able to carry out research at the end of the Camargue where the Rhone delta pushes out into the sea. This is an important place for wildlife with the potential for hosting all sorts of wildlife from terns to turtles. Unfortunately another problem exists here: large assemblies of white camper vans from all over Europe, apparently present throughout much of the summer months, which disturb the environment and leave rubbish behind them. 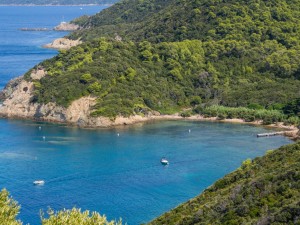 As a result of the trip A Rocha are currently looking further into the possibility of developing marine work in the Mediterranean. Whether they do or don’t everyone who took part in this trip had a great, interesting and enriching experience, and we want to thank them warmly for their dedication and their concern to preserve our beautiful country.

(Thank you Alison Walley for the traduction)