A word from the new president of A Rocha France, Rachel Calvert

After six years as President of A Rocha France, Paul Jeanson has just handed over to Rachel Calvert, who is involved with the church union ‘Perspectives’ and has followed the work of A Rocha with interest for many years. As the new president, Rachel gives us her vision for A Rocha France. 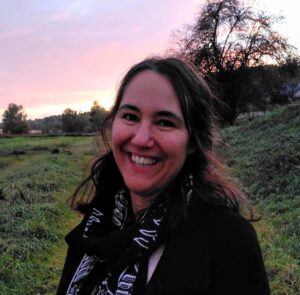 Christians everywhere have always been united by a simple confession: “Jesus Christ is Lord!” But if this statement is true, what does it mean in practice?

With more than twenty years of experience on the ground in France, A Rocha has never been content with mere theories about the Bible and the environment. Whether it is through individual behavioural change, advocacy or collective projects, our love for the Creator and his creation moves us to action.

I am impressed when I see the field work that the A Rocha France team has done over the last few years, whether in the Vallée des Baux or at Les Courmettes. I am moved when I see the diversity of skills that God has put into the salaried team, the network of ambassadors and the board of trustees. I am encouraged by the ambitious development goals that have been set for the next two years as part of the CoCliCo project. And I am deeply grateful for all that Paul Jeanson has been able to contribute in his role as Chairman of the Board over the past six years; his courage, energy and vision. We are pleased that Paul will continue his commitment to the Board, now as Treasurer.

In a context of a deepening ecological crisis, A Rocha must rise to its calling among believers in France. We are called upon to provide resources to all, and in particular to Christians, so that everyone can get involved at their own level and according to their skills. To do this, the groundwork of scientific follow-up and hosting in the Vallée des Baux and Les Courmettes will be essential; so too will the development of the network of A Rocha ambassadors and local groups across France. In Jesus Christ, God shows his commitment to his creation by taking on human flesh. And we also want our Christian convictions to be embodied in our action in favour of the environment.

We Christians will experience the dramatic consequences of climate change and the collapse of biodiversity, as will the whole of humanity. Have we put down deep enough roots in the Word of God to stand firm in the storm? Do we have a theological vision that will enable us to live fruitfully in this generation?

For many French people, it is difficult to imagine the future in a positive light. After two years marked by Covid, fatigue weighs heavily (see the study by the Jean Jaurès Foundation, November 2021). Faced with the climate crisis, the depletion of resources and various forms of pollution, anxiety is a natural reaction. We Christians are also trying to find our bearings in a society that has changed for good. Fear can become paralysing.

But let us not forget that it is when the night is darkest that the light shines brightest. “The light shines in the darkness and the darkness has not overcome it” (John 1:5). Times of crisis are also times of opportunity for believers. Confident in the victory of Christ, let us seize the new possibilities God is putting before us.